This year's Sociedad Hispana Doylestown Scholarship Awards received front page coverage in the Doylestown Observer this week! The cover photo of the students was taken at the Scholarship Interview Night on April 12th by photographer and SHD founder Terry Hull. Awards were presented at a reception at the Doylestown Country Club on May 3rd. The article and link to the article appear below. 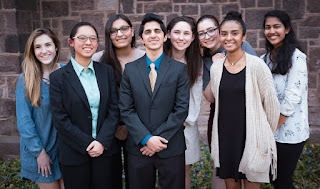 by Christine Wolkin
On Thursday, May 3rd, Sociedad Hispana of Doylestown (SHD) recognized and awarded financially the finalists of its annual scholarship program at Doylestown Country Club.
The scholarship recipients came from three local high schools – Central Bucks South, North Penn and William Tennent.
“It has been a real thrill this year, as in previous years, to see the high caliber of students in our high schools who have elected to study Spanish as a second and sometimes a third language,” said Juan Navia, SHD President.
“Our finalists this year are a diverse group of students, all of whom have recognized the value and importance of having fluency in more than one language,” he continued.
Sociedad Hispana Doylestown is a 501(c)3 tax-exempt Pennsylvania chartered non-profit corporation, and awards scholarships annually to support its goal to facilitate intercultural understanding through language, literature and the arts.
Since 2012, corporate sponsor and SHD member donations have generated more than $37,000 in scholarship funding.
Thanks to the generosity of several new sponsors, this year’s scholarship awards total $7,250.
While Navia acknowledges that for the Sociedad Hispana de Doylestown, their goal is for students to choose Spanish as their second (or third) language, any language learning is going to prove an invaluable asset to students as they navigate beyond the classroom.
“The important thing is to learn another language. If you look at the students we’ve awarded with scholarships, many of them have a third language; Spanish for them is a third language. I think that in this world the greater the ability to communicate with other people and other cultures, the better,” he said.
To be eligible for these scholarships students have to have completed the highest level of Spanish in their high school.
“The idea is to have them continue to develop their Spanish skills and, frankly, to reward them for the effort they’ve made so far,” said Juan.
SHD announced eight students as first stage scholarship finalists of its Spanish language competition for 2017-2018.
The finalists are: Sofia Jacalone of Central Bucks High School South, Rahul Joglekar, Manasi Nawathe and Catalina Barroso of North Penn High School, and Tanya Wang, Victoria Alanis, Abigail Christofas and Nidhi Patel of William Tennant High School.
In addition to high school scholarships, the corporation implements its mission statement through cross-cultural exchanges such as Spanish and English language learning, weekly and monthly tertulias (informal conversational meetings), Spanish language film club, and local, as well as international field trips.
For more information visit http://sociedadhispanadoylestown.org.

(To translate this site, please scroll down)